Via Celtica - In tune with the Celts

Responsible for this content
BLB-Tourismus GmbH Verified partner  Explorers Choice
The Via Celtica promises a special experience: the route was developed by a prehistoric people and their defining culture: The central theme is the world of the Celts.
open
difficult
Distance 14.7 km
Duration6:00 h
Ascent595 m
Descent594 m
The Via Celtica is a spiritual hiking trail. Spirituality has come to play a central role in society. Many people are searching for direction, a place to retreat to, and meaning in the modern world. Put very simply, spirituality is the search for meaning.

Impressive natural phenomena like a colourful flower meadow, a babbling spring, the effervescent Eder river, majestic trees, mystical forests and rocky landscapes with towering cliffs line the route as the anchor points of this challenging trail.

The Celts lived in harmony with nature and worshipped it. They used plants as medicines, saw springs and rocks as points of contact with the Other World and interpreted mighty trees as divine symbols.

It is not primarily about a topic that gave rise to lively discussions when planning the project: Was Wittgenstein part of Celtic culture or just an area of contact? Are there specific indications of the influence of Celtic culture in Wittgenstein? Which regions in the surrounding areas can be definitively identified as Celtic?

The route begins in Dotzlar and quickly takes us to a newly sewn flower meadow. This is how the meadow would have looked or been similar to in Celtic times. Back then, the economy was based on growing crops and rearing livestock.

We walk uphill to the source of the Meisbach. In times gone by, springs were worshipped all over the world.

A short distance away, we can see Burgberg on the opposite side, a well-proportioned, aesthetically “beautiful” hill.

On the heights, we come to the “Großer Keller” nature conservation area. The mighty spruce trees with at least two crowns each, the “Zweisel”, are quite striking. The nearby juniper heath is under strict nature conservation. Juniper was an important healing plant for the Celts.

We enjoy a wide-ranging view of the Edertal valley and the surrounding hilly landscape from a viewing platform.

Then it’s downhill to the Eder river under the bridge. Rivers were a symbol of the circle of life for the Celts.

After a steep climb, we come to a mystical oak forest, the Honert, interspersed with numerous cliffs.

After descending again, we reach a highpoint of the tour at Dotzlarer Weir. Three natural phenomena that held great meaning for the Celts occur together here: a river, a steep ledge projecting into the river and an ancient oak tree.

We hike to the next place of power, an extensive rocky region with vertical crags and broad piles of rock scree.

After another climb, we reach a Dotzlar landmark, the “Zollbaum” (toll tree) and a landscape that was planted as part of a juniper conservation project.

The destination for the hike is the fort dating back to Celtic times, the remains of which can only barely be made out. The fort is a mysterious and mystical place. We can still only guess as to the function the complex served.

The hike ends here. We look out over two thirds of the landscape we have hiked. You can see the area around the source of the Meisbach, the nature conservation area, the Edertal valley and the Honert forest. After a short descent we reach the exit point.

all notes on protected areas

You take the Deutsche Bahn train RB 93 service via Siegen to Bad Berleburg train station and change to the R33 bus in the direction of Dotzlar.

By car, you get to Dotzlar on the A45 Dortmund-Frankfurt motorway and take the Siegen exit, then the B62 and B480 main roads.

There is plenty of parking at the start point.

Book recommendations for this region:

Recommended maps for this region:

The tour is 14.5 kilometres long and takes about five to six hours. Because of the steep passages and many paths, the trail is very challenging. Good physical condition, sturdy footwear and surefootedness are essential.

These suggestions were created automatically. 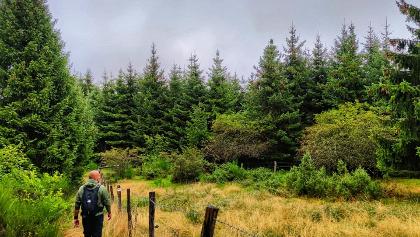 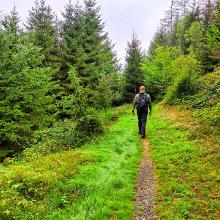 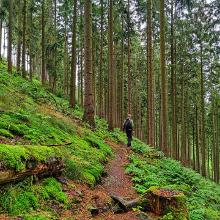 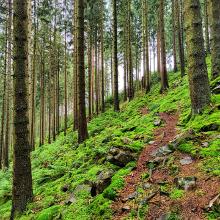